Summer flight plan 2022: a wide range of destinations to choose from

Flights to over 90 destinations with 25 airlines: the flight plan for the summer season will start on 27 March 2022 with a number of new destinations.

As a regional gateway to Europe and the Mediterranean, EuroAirport is once again offering guests more than 90 non-stop destinations with its 2022 summer flight plan (until 29 October). The offer includes destinations in France, Italy, Spain, Greece, Morocco, Egypt, Turkey and Canada, among others.

EuroAirport is delighted to welcome Air Albania, the national airline of Albania, as the new airline flying between EuroAirport and the city of Kukës in north-eastern Albania (twice a week).

As of May, returning from a break as a result of the coronavirus pandemic, Air Transat will once again fly to Montreal with the state-of-the-art Airbus A321 Neo Long-Range (once a week). This long-haul variant of the A320 Neo is one of the most modern aircraft in its class. Air Transat is also enabling passengers to connect to other attractive destinations in Canada via the Montreal hub.

The EuroAirport-based Corendon Airlines is expanding its offer and is now also serving the port city of Chania on Crete, which represents a new destination for EuroAirport. easyJet is also flying to Crete, with flights to Heraklion airport. Wizz Air has expanded its route network with flights from EuroAirport to Rome and Kukës. Due to high demand, Ryanair is increasing the number of flights to Zagreb (to 3 per week).

In this summer flight plan, an increasing number of latest-generation aircraft are operating out of EuroAirport. Air Cairo, British Airways, easyJet, Pegasus, Turkish Airlines and Vueling are using even more A320 Neo and A321 Neo aircraft. Corendon Airlines, Ryanair, SunExpress and Turkish Airlines are increasingly using Boeing 737 Max aircraft. Thanks to their advanced engines and improved aerodynamics, these latest-generation aircraft bring significant reductions in noise and carbon emissions.

Travel regulations are still in force that require additional controls. This will inevitably lead to longer waiting times at checkpoints for both departures and arrivals. An early arrival at the airport is therefore strongly recommended.

Looking ahead to the winter flight plan

We can already announce that Corendon Airlines will be offering a weekly flight to Funchal/Madeira. 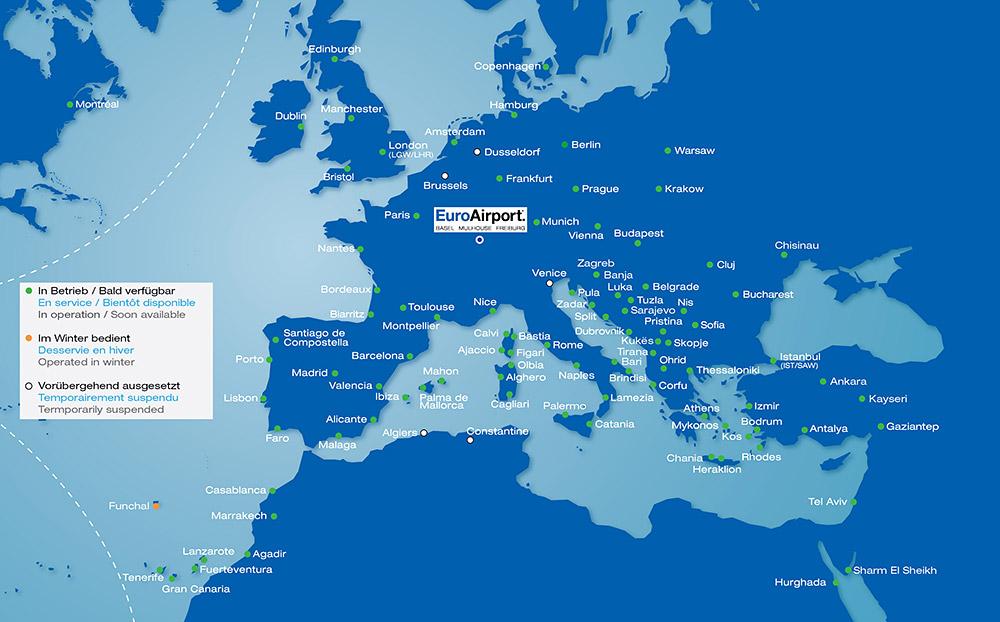